the best food in NC !

see what we can do

Get to know us!

chef and owner of SPREAD

John Upsal, chef and owner of SPREAD, explores the rich diversity of our region’s ingredients. With access to so many wonderful resources, from the beautiful rainbow trout and artistic influences of the western region, to the rich beef, whole hog, and produce offerings of the piedmont, to the bounty of the sea in our coastal regions, we truly do have it all! John’s mission is to create dishes that best showcase North Carolina’s resources and to serve those dishes with the renown hospitality of the South.

John began his culinary career just as the farm to fork movement was beginning to take shape. While managing several fine dining establishments in the Triad, John learned the finer points of white linen service mixed with the nuances of southern hospitality.

While attending The Art Institute of Raleigh/Durham, John worked in the kitchen of Poole’s Diner with Ashley Christensen receiving the true hands-on education chefs covet. It was there John witnessed gracefully executed, locally sourced, super fresh, and southern inspired dishes. With the encouragement and support of his wife, John was motivated to begin his solo career. Starting his new endeavor with a bang, in 2012, he catered an event for 200 for the A.J. Fletcher Foundation at the Fletcher family home in Raleigh.

Director of Marketing and Operations

We can't do anything without people to feed !

“The Southern food movement was a major inspiration in my early career and after much hard work and observation, I felt I had been awarded the tools and perspective to join the conversation surrounding Southern cuisine.” 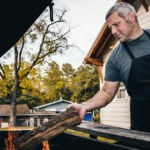 “Later during the experience, I began to gravitate more toward the relationships I was developing in the kitchen. Whenever I had a free moment, I would find myself in awe of the movement, organization and language of the chef. It was then that I truly felt the calling to cook.”

HAVE A PROJECT ? GET IN TOUCH